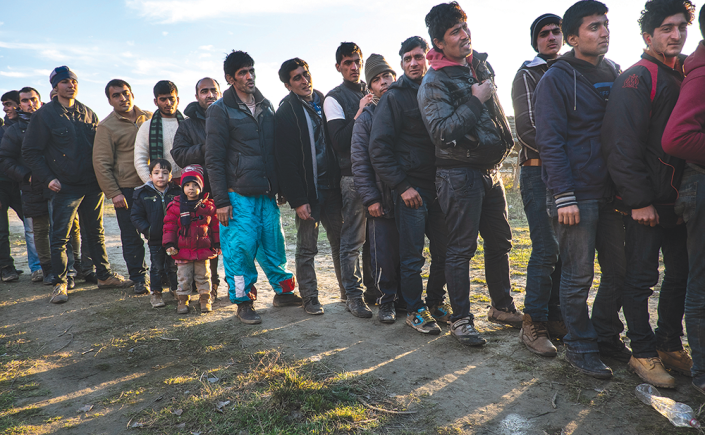 In the first few months of 2015 as much as five percent of Kosovo’s population – an estimated 100,000 people – left the country in search of better opportunities in the EU. We witnessed the upheaval first hand and traced the human cost to those taking the newest route into Europe

Despite the perpetual motion of people passing through it, the Pristina bus station is a grey and dismal place. It looks run-down and dirty, no matter how many times its concrete steps are swept and cleaned.

It’s 11pm, and it’s getting cold. There is one bus left for the night, but the stalls, shops and one cafe still thrum with people. For years the bus to the Serbian capital of Belgrade would leave every evening almost completely empty, passing the border that separates Kosovo and Serbia with just a handful of passengers. Not tonight.

Several hundred people have crowded around the bus to Belgrade. They have packed lightly. There are young families clustered together in fours and fives. Young men – friends – in groups of two and three. Older men travelling alone.

They all have tickets but there are not enough seats to go around and, as the bus leaves, the aisles are full to bursting with standing passengers. It is a six-hour journey to Belgrade, but it only takes an hour to get to the Kosovo-Serbia border.

In the past the bus, with its meagre numbers, would be quickly waved through. But today a Kosovar border guard ushers the coach to one side for an inspection. Everyone is ordered off and their papers are checked. Most are allowed to cross but about a third – a mix of men, women and children – are told they cannot travel any further.

They walk back down the unlit road towards Pristina without argument. Before they begin the long trudge home, they stop a few hundred metres from the border post. Dozens more are waiting there, the remnants from the previous bus. They are unsure of what to do or where to go next.

Those who survived the cull smoke cigarettes before re-boarding the bus. Where are they going? Why are they going? And why now? “I will tell you,” one young man says, looking around to see if he is being overheard. “But not here.” He walks around to the back of the bus, away from the guards, as if about to reveal a shameful secret.

“We are escaping,” he tells me. “First we go to Belgrade. Then we go to Subotica.”

3rd January 2015
The woods outside Subotica, Republic of Serbia

A campfire burns on the floor inside an abandoned brick factory on the outskirts of the northern Serbian city of Subotica. Three young men sit around it. Their clothes are dirty and an icy wind is blowing through the glassless windows. The men are a long way from home. All three of them came here from Afghanistan. They didn’t know each other until a few hours ago.

“First Turkey, then Bulgaria and now Serbia,” says Mahmad, a man in his early twenties, when asked how he reached Subotica. He is the only one of the three who speaks a little bit of English. Mahmad pulls his black hat over his ears against the cold wind. His new friends don’t say a word, but stare silently into the fire. “I came here yesterday,” Mahmad continues. “Tomorrow I will go to Hungary.” (….)

Within a few months, around 50,000 people have left Kosovo. Thanks to a change in travel restrictions, they’ve headed via Serbia to Hungary, an EU member state and part of the border free Schengen zone. The mass exodus has taken the Kosovan authorities and EU governments by surprise. Many of these would-be emigrants have already been sent home from EU countries. Mitra Nazar reports from Kosovo.

Listen to the full radio report for Deutsche Well English